Lady in Veils and other dreams[edit | edit source] 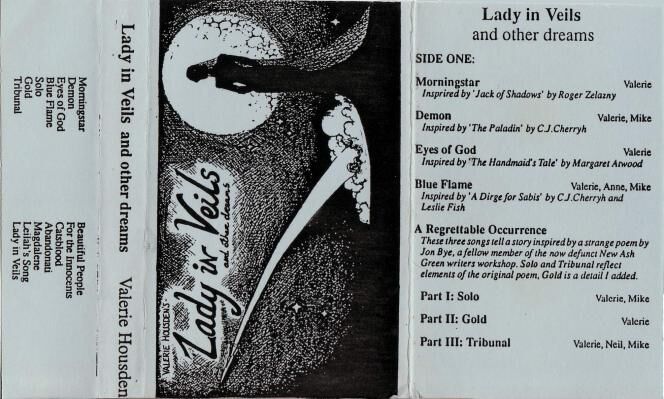 Inspired by Jack of Shadows by Roger Zelazny

Inspired by The Paladin by C.J. Cherryh

Inspired by The Handmaid's Tale by Margaret Atwood

Inspired by A Dirge for Sabis by C.J. Cherryh and Leslie Fish

A Regrettable Occurrence These three songs tell a story inspired by a strange poem by Jon Bye, a fellow member of the now defunct New Ash Green writers workshop. Solo and Tribunal reflect elements of the original poem, Gold is a detail I added.

Inspired by The Uncanny X-men

For The Innocents: Valerie, Mike

Inspired by The Uncanny X-men

Inspired by The Ballad of Halo Jones by Alan Moore

Inspired by Abandonati by Gary Kilworth

Set in Mike Whitaker's Before the Dawn universe

Inspired by Empire of Fear by Brian Stableford

Inspired by A Talent for War by Jack McDevitt

Harmonics for 'Beautiful People' and 'Blue Flame' by Anne Rundle. All other vocal arrangements by Valerie Housden (with a little help from J.S. Bach - thanks, Johann).

Acknowlegements: A big thank you to everyone who helped with this tape, especially: Mike, Anne and Neil; Techies Pat, Andy, Gordon and Richard; Gytha; Sue; anyone I have inadvertently forgotten; and extra thanks to Richard for bullying me into doing this tape - IT'S ALL HIS FAULT!

Unauthorised public performance, broadcasting, or copying of this work prohibited

Retrieved from "https://filk.fandom.com/wiki/Lady_in_Veils_and_other_dreams?oldid=3281"
Community content is available under CC-BY-SA unless otherwise noted.